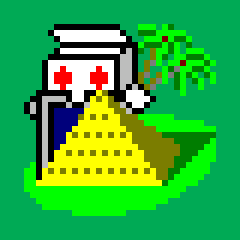 This post is a little late. I should have written it before the post for Canfield, since it turns out that Pyramid Solitaire was programmed first. But I chose to take my time and wait to finish Pyramid Turn Three variant. Then I was looking for the help file of the game Tut's Tomb released with Microsoft Entertainment Pack 2.

And so, without further ado, I can simply pick up much of the original documentation provided by Microsoft at the time.

The object of Pyramid Solitaire is to remove all the cards in the pyramid by pairing cards where ranks add up to 13. Kings may be removed individually.

To Deal a new Hand:

Note: A free card is one which has no other cards lying on top of it.

To Turn Over Cards in the Deck:

Note: One or three cards will be turned face up depending on what variant you play (Pyramid Turn One or Pyramid Turn Three).

To Turn Over the Deck:

Rules of the Game

From now on, even if like me you no longer have access to an old personal computer with Windows 3.1, you can still play Pyramid Solitaire or Pyramid Turn Three online. As usual with Solitaire-Play, these are responsive solitaire games. You can play them for free with phone, tablet or desktop...