When you play Golf solitaire online with a phone set in portrait mode, game over dialog hides cards on the Foundation.

Let's say the Stock contains one last card, Foundation ends with 8 of clubs and 2 cards remain on the Tableau: 7 of hearts and 9 of spades.

Suppose you play 9 of spades, draw the last card from Stock and the game over dialog immediately pops up. That means the last card isn't a 6 or an 8, otherwise you still have a valid move.

But on phone, you can't see the last draw. May be it's a 10? In this case, you undo the last move and instead build 7 of hearts over the 8 of clubs. Then draw the last card and win the game by playing the 9 of spades over this 10!

From now, I display the game over dialog at the bottom of the screen. So the game surface is free and you can choose to undo last move or give up. 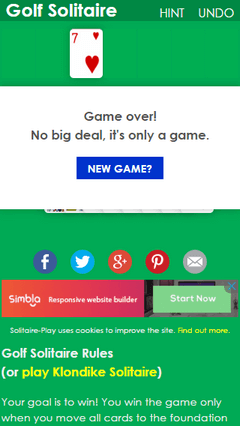 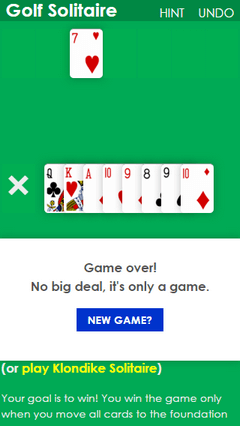 Update: I also recreate cards deck for phones. Now each card contains its suit on left, which is better when cards are displayed in fan view.